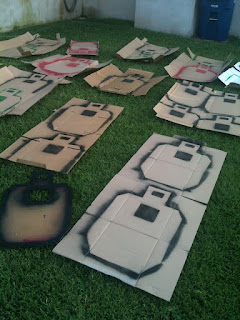 What do you do with leftover cardboard and almost used-up spraypaint? Make targets. Lots of targets
Posted by That Guy at 8:08 PM 5 comments:

Fired about 50 rounds total from five different magazines. All worked without a hitch. No signs of stress, overpressure, or parts flying off.
Posted by That Guy at 12:16 PM 4 comments: 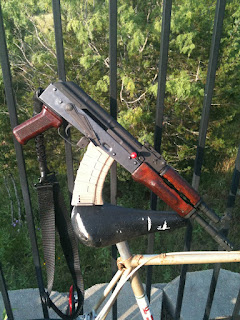 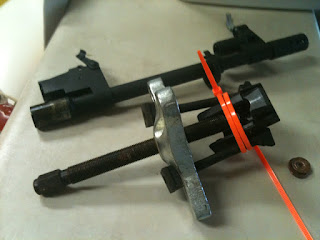 Pressed the barrel out of the trunnion. Remember: if you aren't using duct tape and zip ties, you aren't trying hard enough
Posted by That Guy at 2:07 PM 2 comments:

An Award for President Obama

45er posted about the latest stunt our Attention-Whore in Chief has pulled.

GBBL made a great reply that the President deserved a Participation award for the last 3 years.

So, I decided to throw that together for him: 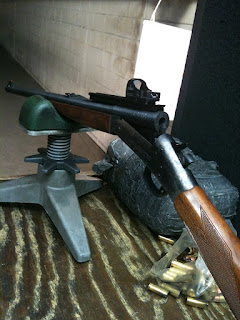 After the main part of this build got lost in a Wizard of Oz moment, we now seem to be back on track.  All the parts are here, I THINK I have all the tools, and hopefully there will be some free time to tinker in the garage over the next week or so.

What I have here is a Centerfire Systems AK Pistol Parts Kit, a NoDakSpud receiver, and some miscelanious parts from AK Builder.  Not shown is me with a blank look on my face- thinking I have gotten in over my head.

I have been researching the crap out of this online, and I'll start the build off soon and post progress as I go.  Anyone that has practical experience building an AK from a bare receiver, your input would be greatly appreciated.
Posted by That Guy at 10:26 PM 2 comments:

Bad luck- I haz it

Have I  ever mentioned that I have bad luck, particularly with guns?

I think I may just have mentioned it before.

So, a few days ago, I got the wild hair to build an AK pistol.  Mostly because I could not find one for sale for a reasonable price.  So, I bought a parts kit, got some tools, almost bought a receiver flat, bending die, and shop press... but just went ahead and ordered a NoDakSpud receiver and had it shipped to my FFL.

In the meantime, I should have seen it coming.  Things were going too smoothly.

Then the first thing happens.  A box of parts shows up covered in BBQ sauce.

Well, the receiver is supposed to show up today, so last night I track the package.

I track it again this morning, and it says the same thing AGAIN.
I google news about anything happening in Peru, IL and find that there is a minor flood in the area.  That can't be it, so I email NoDakSpud, and find out that UPS had a freaking train derail near Chicago, and my AK receiver was in the middle of it.

Just to add insult to injury, I look for the train wreck on the news.  Just to see if it was something like a bridge collapse, hit a truck, anything like that.  Nope.  It was a freak gust of wind.

Well, I now have a name for my AK Pistol:
TRAINWRECK
Posted by That Guy at 10:51 AM 5 comments:

Bringing a Gun to a Car fight

Well, looks like we have an incident of that happening in Syracuse, NY.  After spending a week in Syracuse last month, I have no doubt in my mind that this is probably drug or gang related, but the lesson does stand:

Make yourself a moving target, and use the weapon that you have ready and have been training on daily since you were 16 years old.  If you CAN'T use the car, then the gun would be the next choice.
Posted by That Guy at 8:51 AM 1 comment: 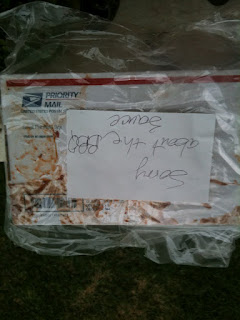 This is actually pretty funny
Posted by That Guy at 6:34 PM 1 comment:

This past weekend, I attended the Defensive Pistol Skills 1 class from KR Training.  The class was great, and I am going to start off by skipping to the end- I recommend KR Training and this class.  Now that we have the suspense out of the way, lets get down to the nitty-gritty.

There were several reasons for taking this class-
First: this was a birthday gift to my father-in-law.  My FIL is a retired federal agent, and recently got his Texas CHL and is getting very serious about carrying for protection.  I wanted to support that by getting him training that was not just shooting at paper on an indoor range
Second: Refresher for me.  I have taken this equivalent class before from another VERY good trainer, but I knew I had not been training/ practicing enough.
Third: Evaluate KR Training.  A bunch of us gun nuts (including 45er) had gotten into the habit of going for yearly classes with Steve Moses at Bluff Dale Firearms Academy.  Bluff Dale is a long damn drive from here, and while it was 1.5 hours to get to KR, it was still much shorter.  I was wanting to see if KR would be a good option for the group.

Bonus- The drive from Austin took us right through Elgin, TX and past the world famous Southside Market and BBQ

KR is a great operation.  A private range, private classroom, and very dedicated instructors.  The class started out with an equipment and skills evaluation- Reactive targets that you had 3 seconds to knock down, moved into classroom instruction, and then went hot on the range.  And when I say hot, I mean every bit of it.  It felt like August- we were all dripping sweat in 30 minutes.

The range part of the class started on the fundamentals and built upward in a logical progression.  We went from base trigger work, through drawing, moving on the draw, threat scanning, multiple targets, and drawing from concealment.

One of the pluses for this class was the amount of instructors.  There were 14 students, and SIX instructors.  Everyone had one on one instruction on parts that were needed.  This was also the one possible detraction from the class- there were a couple of times I noticed conflicting instruction.  But it was minor and seriously only happened twice.

The students in this class was an eye opener.  We were everything from a college aged young woman through a retired law enforcement officer in his 70's, five women total.  Equipment was heavily slanted towards Glocks from the student side, S&W M&Ps on the Instructors and a smattering of everything else.  There were two 1911s (including my STI), one S&W 910s (my FIL- who will be selling it and buying a Glock ASAP), one CZ (yay!), one S&W Shield, and one what I think was a SCCY CPX 9mm- which surprised the heck out of me.  While I hear a lot of people extol the virtues of Glocks, M&Ps, and the other plastic fantastics- at the only people to knock down both of the reactive targets at the end of class evaluation were the people with 1911s.  Not saying that 1911s are better, and I am known to carry Glocks a lot, but that is what happened.

I had 2 equipment failures.  Both of the STI supplied mags I had failed in one way or another during the class, but the two Wilson Combat mags ran flawlessly.  Time to buy two more Wilson mags and use the others as targets.

All in all- I learned a lot at the class, even though it was a refresher.  My FIL learned a whole lot and is talking about taking it again with me when he buys a Glock.

As I said before, I recommend KR Training and I plan on taking more classes as soon as I can.
Posted by That Guy at 12:05 PM 2 comments: 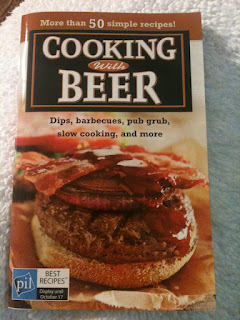 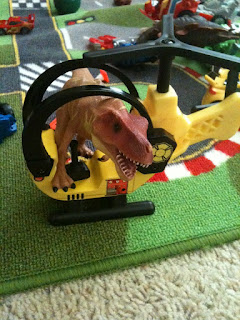 T-Rex in a helicopter. Your argument is invalid
Posted by That Guy at 6:23 PM 1 comment: