Two things I think I need

I was goofing off on Atlantic Firearms website and saw that Slidefire Solutions now has an AK-47 bumpfire stock set.  Well, lookie there... That looks like a GREAT way of turning money into sound.

Yep.  I need one of these.  I could swap it between the WASR and the SAIGA as needed....

But the ultimate would be the Mini Draco and a $200 SBR tax stamp to put them together.

I think that would make one heck of an attention getter at the range.

Sumdood gets a Glock under the tree. Sumdood is surprised that the gun functions correctly and fires when the trigger is pulled.  Sumdood's uncle now has an extra hole in his leg.

H/T to The Gun Wire 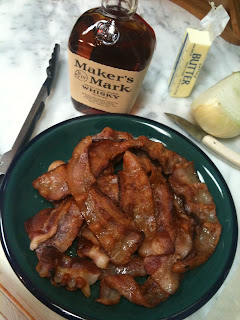 Time for the traditional bacon and bourbon feast!
Posted by That Guy at 5:40 PM 3 comments:

Just in case I'm on the 'Nice' list, please add this to my request file:

I know it's last minute, and I don't want to be greedy, but one of those and a Leupold VX-11 3-9x40 scope and rings would be awesome under the tree.

Sorry I have been so light on content lately.  Crazy time at work, the holidays, and the dumb idea I have every year of making gifts by hand has really ate into my free time.

In the mean time, I have the wild hair to bust out the cutting torch and welder and build a "Rocket Stove".  Not that I NEED one, but that I think they are cool.  Here are some links to research:
Rocket Stove
Building one
Grover Rocket Stove
Deadwood Stove

...you would even say it glows.

A few days ago, I went "tourist" at the local Asian market .  I had a guide- a co-worker that is Asian, and from Vancouver, which from what I understand is a mecca for awesome Asian food in North America.  I love going to the market and finding new foods and ingredients that I have never seen or even heard of before.

So, while I was wandering about, I saw something that caught my eye.
"Rice Cake Sticks?  What are these?"
"Those are great.  One of my favorite Korean foods.  Cooked in soup or fried.  Good stuff."

Well, that's all the endorsement I needed.  I picked up a package and a few other ingredients that I hope will be featured in a future post.

So, I did some research, and found some cool recipes .  I decided to go with the fried version, and I'll do the boiled/ soup version sometime later.  Before I started cooking, I tried one raw.  Don't do this.  It is hard, bland and plastic-y.  Made me worry that this was going to taste like... well, cooked bland plastic.

So, I got some oil hot in the pan, washed the starch off the sticks and threw them in the pan.
While these were working, I did a fridge dump of a bunch of ingredients. 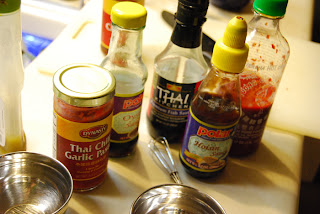 ...and started whipping up sauces.
By now the rice cakes were developing some color.
I tried one straight from the pan, and was VERY suprised.  Besides it being really freaking hot, they were suprisingly good!  Crispy on the outside, and fluffy and creamy on the inside.  It was time to plate and few of these up.

If you get a chance to play with these, do it.  They are worth it.  Much like Asian Gnocchi- they take the flavor of what you put on them.  Very filling as well.

Now it was time to enjoy a beverage... 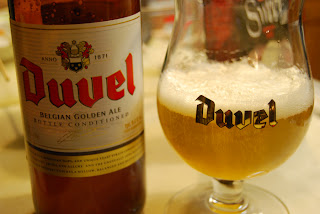 Back to the experiments.

A while ago, my same co-worker told me how "Special Fried Rice" was made using a chinese dried sausage that would be diced and boiled with the rice as it was being prepared.  So I took that idea and twisted it a bit.

Diced the sausage, and then added to the rice as I prepared it according to the package instructions. 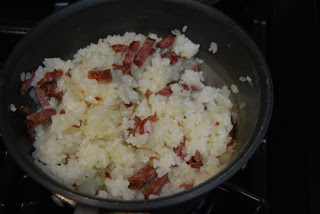 They were really tasty, but a cast iron bitch to make.  The rice stuck to everything even after frying.  I doubt I will do these again... maybe with a different rice.  Maybe just as an actual fried rice.

Conclusion?  Step out of the comfort zone.  Play with some new ingredients.  Have fun.
Posted by That Guy at 8:56 PM 2 comments:

Spent all day hunting, and all I got was soaking wet.

Saw a few deer, most were not ones I wanted to shoot, one that I did, but he never gave me a shot.  Oh well.  It was still a day in the woods.

However, 45er whacked two feral pigs.  I'll try to get some pictures up later when I am not dog tired.
Posted by That Guy at 8:58 PM 2 comments: 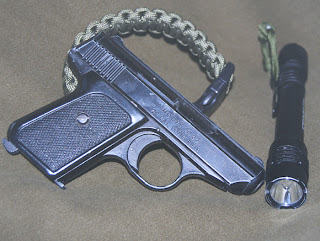 Artistic pictures of a complete piece of crap.

Behold the glory that is the Jennings J-22.  A single stack, striker fired, single action .22LR pistol made of pot metal, some springs, and radio-age plastics.  This is the epitome of what the racist Democrats call a 'Saturday Night Special.'

I bought this back in the early '90s at an Austin gun shop for probably $90.  Maybe $75.  It was junk then, and is junk now.  The safety is small and impossible to use, the trigger is tough and gritty, sights are miniscule, and the finish is ugly and obviously fragile from the scratches and dings.  But what it lacks in refinement, it makes up with lack of reliability.  This was fired for the last time probably back in '95 or '96.  The last round ever through it's barrel fired in what is called a 'Slam-fire.'  The gun fired as the first round was chambered from the magazine.  When it did that, it was thrown in a range bag and forgotten.

So, why do I still have this thing?  Because it is junk and dangerous.  I cannot risk someone buying it and hurting themselves as it slam-fires again... or God forbid someone wants to trust thier lives to it.  So, it sits in my safe.  The only thing I can hope for is that there will be some dumb-ass, misnamed "Gun Buy-Back" program that I can get $100 for it (and since we have an idiot Californian as a police chief now- that could actually happen.

Seriously, it was an honor just to be nominated

I don't know how it happened, but I somehow was named Blog of the Week over at Standing Outside Looking In.  I am honored, and surprised by the people who read these ramblings- I mean, I started this blog basically as a place for me to warehouse my links so I would not have them on my work computer.  Thank you very much, Stephen!

...and I have added you to my links.  Sorry for the oversight.

From the Asian market 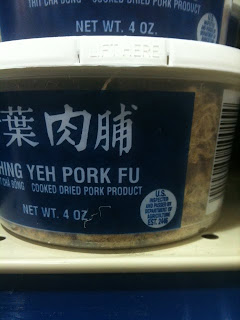 So, things have been stagnant with the holidays, work travels, hunting season, blah, blah, blah.... all the real world stuff that interferes with the "I'm kinda a big deal... online." stuff.

The big news story today is that the United States Postal Service- a grand old tax vampire with a storied history of blunders and idiocy- has decided to cut service and employees in an attempt to stay solvent.

So, here seems to be the thought process:
"We are getting our asses handed to us by a cheap and instantaneous service (email, text, etc...) for interpersonal communication, while getting completely dominated in the package delivery arena by inexpensive, fast and reliable service providers (FedEx,UPS, etc..).  What we need to do is make our service SLOWER and LESS RELIABLE!!!"

Seriously.  This is the line of thought of Government Service.  When getting completely destroyed in the open market by services faster, cheaper, and more reliable- make your service slower and less reliable while keeping prices the same.

Remember this when someone starts talking about Government controlled healthcare.  It will be slower, less reliable, and have that award winning customer service attitude that comes from not having your pay tied to performance. 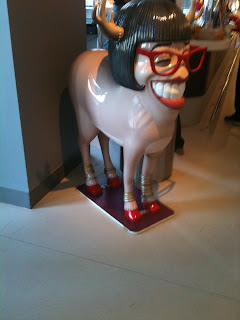 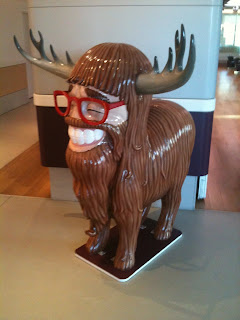