T-Shirt for our times 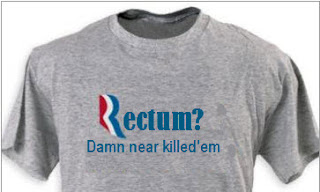 Robb at Sharp as a Marble made me laugh myself silly with his bumperstickers this morning.  I saw the Romney Shirt and had to do some Q&D mods using Snagit.
Posted by That Guy at 12:04 PM 2 comments:

I went nuts this weekend, and put solar power in my hunting blind.  This started out because my phone kept running out of power in my blind.  I was researching portable power solutions and it kind of snowballed from there.  Solar cells were procured, deep cycle marine battery was bought, LED lights for RVs were pressed into service... and I ended up with a totally redneck solution.


Now, I have a proof-of-concept of doing off grid power on the cheap, a way to charge the cell phone, and a way to keep the spotlight running for the midnight pig hunts!
Posted by That Guy at 2:15 PM 9 comments:

Rounding out the AK collection

Or, at least, I'm TRYING to round out the AK collection.

A while ago, I got the bug to get one of the Goofy AK "Draco" Pistols.  Not for any good reason.  Just wanted something to go with the WASR and the Saiga 12, the bonus was that it was louder than hell and with a massive muzzle flash.  Kind of like firing a black powder cannon but with a 30 round magazine and a sling.
Back in January, I saw both the Draco and the Mini Draco for sale everywhere for $350-$400.  So, I started looking around and...

I seriously saw a Mini Draco on Gunbroker today for well over $1000.  There was one at the gunshow last weekend for $1395.00

Supposedly, Century is getting another shipment of the Dracos in a few weeks.  I guess people are gouging while the gouging is good.  Limited supply coupled with the Pre-Election Obama Panic (PEOP)tm  is causing this stupidity.

Rest assured, I am not going to pay that for a goofy gun.
Posted by That Guy at 12:42 PM 2 comments: 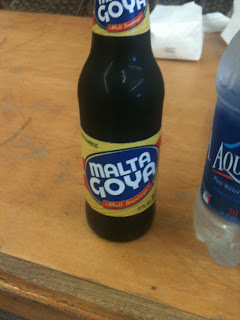 I have heard of and seen this stuff before. Never tried it.

Now I have. Sweet, malty and with a strange cake-like aftertaste. Huh. Odd.
Posted by That Guy at 4:55 PM 2 comments:

Sebastian over at "Shall Not Be Questioned" has a great idea

The president is looking for nominations to receive the Presidential Citizens Medal.  It would be a nice little protest to nominate Ted Nugent... 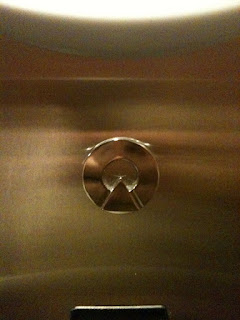 Ever notice that the logo for Schindler Elevators looks like a peep sight?
Posted by That Guy at 6:39 AM 1 comment: 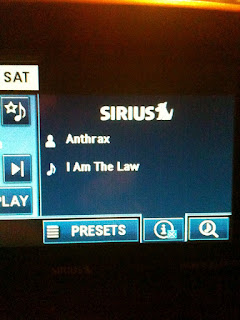 Rental car has sat radio
Posted by That Guy at 7:06 PM 3 comments: 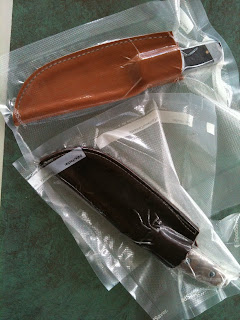 Using a foodsaver vacuum sealer to wet mold sheaths.
Posted by That Guy at 5:21 PM 4 comments:

...seeing the IT guy come into the office with a big fan and makes a bee line for the server room.
Posted by That Guy at 8:32 AM 1 comment:

Good time at the range

Back from the range.  It was good to have a GOOD time at the range, instead of the frustration I have been having with finding a load for the CZ-527 Carbine.

Last hunting season I finally ran out of my chosen load for my "old faithful" hunting rifle, an NEF 'Survivor' in .308.  This is an inexpensive, durable, and accurate gun.  It was sighted in for the Winchester Ballistic Silvertips that are now cost like a buck fifty a shot.  That was not going to fly anymore- So I took some ammo that I had on hand and went shootin'

The ammo choices were S&B 150grain "Soft Point Cutted Edge" that works so well in my Ruger M77 Frontier and Ishapore Enfield, Federal '150 grain 'Vital Shock', and the cheap Remington 150  CoreLokt yellow and green boxed stuff.  So I settled in to get shooting.

Results at 100 yards:
1- S&B SPCE.  Pretty crappy group, and had sticky extraction- which on a single shot is a deal breaker.
2- Remington CoreLokt.  The low shot is a called flyer when some guy in the lane next to me touched off his AR-10 right in the middle of my trigger squeeze
3- Federal Vital Shock. Crappy performance from this gun.  One extra shot in this group from some FMJ to see it's POI
4- Dialed in the scope for the CoreLokt.  That'll work :)

I also tested the new Williams peep sight on my Marlin .357 Lever.  It's close, but it needed more time than I had in a lunch hour to dial it in. But it's close enough to roll a bunny at 50 yards.  That'll work for me.

As I mentioned earlier, MI2Tall was there shooting his AR-10.  One of the ejected casings bounced off the divider between the shooting lanes, and hit him in the face.  It was a steel casing, and hit perfect case-mouth straight on and burned a perfect circle on his cheek.  This is why we wear shooting glasses- 1.5 inches another way, and it would have taken an eye.  FYI- ALWAYS wear protective gear.

Finally getting to the range today

Not much time, but enough to make a difference.

Built a knife for a friend.

A very important figure from my life retired a while ago.  This was the man that taught me to hunt, taught me to shoot, and taught me how to be a good person and father.  While he was not blood kin, he definitely was kith- which roughly translates to 'family that you choose'.

A while ago, I was on their ranch, and we were helping split wood from a tree that had fallen years ago.  I snuck a chunk of that wood into my car, and also 'borrowed' a small length of copper wire that came from his work life.  I started working on a gift-

After much cutting, sawing, sanding, and work, I ended up with this corkscrew: 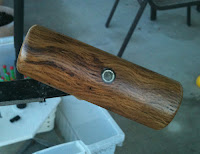 Since I had a little bit more time to create something, I built a true 'working' knife for him to use on the ranch.  A Russell "Green River" Carbon Steel Blade, paired with handle scales made from "horse stall mat" rubber and brass pins made this: 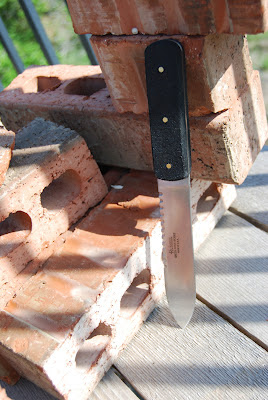 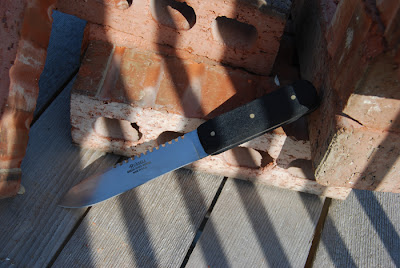 This turned out really nice.  The knife is light, the handle is 'grippy', and it will work great on the ranch.  I thought this would be a great way to say "Happy Retirement" and hopefully show some of the appreciation for everything he has taught me.
Posted by That Guy at 2:16 PM 6 comments:

Not even on a dare 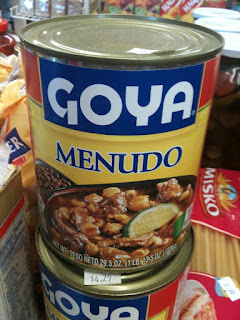