I clicked over to Days of Our Trailers, and was stunned by something they were showing over there: 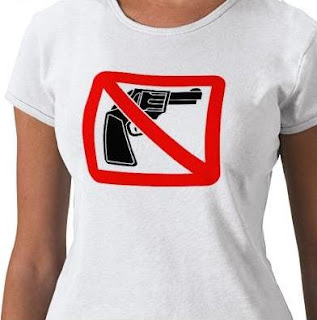 I hope that it is impregnated with ground unicorn hooves to create your own portable gun-free zone (stole that line from 45er).
Posted by That Guy at 9:34 AM No comments:

I've never been much of a 'join'er.

In my hometown, Texans for Accountable Government did a counter to a 'Gun Buy-Back' that the APD was hosting.

I came across this on Rob Allen's blog

Now, I have never been much of a 'join up!' kinda guy. I'm not a faithful NRA member (my membership lapses a lot- mostly based on if they are being stupid), and I'm not a member of any political party. But I'm joining TAG now.


It is time to either become part of the solution, or at least be sand in the gears to slow down the political machines.
Posted by That Guy at 9:02 AM No comments:

Now, Caleb joins the chorus at Cheaper Than Dirt!
Posted by That Guy at 8:04 AM No comments:

Remember, you can vote once from each browser on each computer you own.
Posted by That Guy at 8:30 AM No comments:

Backstory:
I got a gun for my birthday, and it was defective
Did I ever mention that I have bad luck?
It finally gets back to the factory
faster than expected

So I took it to the range Thursday and did a function test. I took all the .44Spl I had on hand and ran it through as fast as I could.

Here are the first impressions:

First off, it has a bit of a kick to it.
It was accurate enough if I did my part. The trigger was great on Single action, and heavy and stagy on DA. If I kept the concentration up, the bullets went where I wanted them to go. I am in the process of giving it a 'poor man's trigger job': dry firing the crap out of it.

All in all, I recomend this gun. I understand that a bad product can make it out of the factory. The fact that Charter Arms took care of me as a customer better than many MUCH larger and 'bigger name' companies. They got it fixed FAST, and it cost me nothing more than a few days.

If you are looking for an easy to carry wheelgun for low cost, look at the Charter Arms line. I know I am now adding one of the 'Pathfinder' .22s to my short list as a utility shooter.
Posted by That Guy at 1:48 PM No comments:

Open Carry- It seems to be the latest 2ndA 'brushfire'

There are lots of blogs and websites that are talking about Open Carry. For those that don't know, open carry is the carrying of firearms with no concealment. It is legal in some places and in some situations. Here in TX, open carry is generally banned in public.

I'll post some links later (it's saturday, I'm lazy and headed for a gunshow), but here are my views:

I think it should be legal, but I would very rarely do so if it was. Carrying concealed makes more sense- it does not draw attention, and provides the element of surprise if you are attacked.

But I would love to not have to be paranoid when carrying that an errant gust of wind or moment of inattention could case me to break the law and lose my license. And I would probably OC when in the local parks and greenbelts.

Eh- not much point to this post. I'll post some cooler stuff later
Posted by That Guy at 8:22 AM No comments:

The Charter .44 Is almost home!

Backstory:
New Toy- Broken in Box
Delay caused by snow (In JANUARY! OMG!)
Made it back to the mothership

Now, I was told when I called Charter back on the 8th that it would take 5 days to repair. I realized last night that if is shipped out today (5 business days later), that I would not have anyone available to sign for the UPS package. So I called to get an estimated delivery day so I could plan for it.

Once again, I got Dee on the phone. Again she was pleasant, helpful, and actually remembered my case. Told me it had already shipped and is scheduled for delivery today!

I WILL be going to the range in the next day or two and will post my results.
Posted by That Guy at 10:01 AM No comments:

Um, this actually might be good. I am stunned by the trailer.

But with Hollywood's track record of screwing up great books and changing the message completely- this could go sideways. Easily
Posted by That Guy at 9:41 AM No comments:

Stop whining! This is a GOOD THING!

This will be my first true rant. Screaming into the void, if you will.

OK, since 90% of the things that I post are about guns, it is pretty obvious that I am a 'Firearms Enthusiast'... a 'Shooting Hobbyist'.... a 'Gun Nut,' if you will. I mostly associate with others that share my same interests. Not exclusively, but there is a majority. And I have to say this about our gun culture:

We are some whiny little titty-babies.

Recently, the TV shows "Top Shot" and "Sons of Guns" premiered. This is the second season of Top Shot, and the first of Sons of Guns.

A quick check around the web shows that, as a whole, we are whining and complaining about these shows. Seriously. Check the links.

Shooting shows on nationwide, respected, networks that are not in the Sunday morning "This or an Infomercial" time slot.... and we complain. A lot. We complain that it's not all shooting. That there is manufactured and over-hyped 'drama', that it is not so technical and specific that it bores everyone but gun nuts to tears.

Then we(as a group) talk smack about these shows. We tell other people not to watch them.

Then we complain that gun ownership and shooting is never portrayed positively in the media. The whole time never seeing our own hypocrisy and the irony in the situation.

Complaining about these shows is like complaining the free ice cream is vanilla and not pistachio- it is the definition of looking the gift horse in the mouth. If these shows fail because us gun-nuts don't support it, do you think they will make another one? Do you think they will improve the show if no one watches, or just cancel it? I can tell you, we will not get the show we want if we don't support these shows that are not 100% meeting to our discerning tastes.


We have become our own 'Fudds' or 'Fuddites'. Not familiar with the term? Somehow, on the boards and blogs of gunnutdom, Elmer Fudd became the mascot of the shooters that don't support all the shooting sports. The guy that supports 'assault weapons' bans because it won't impact his Perrazi trap gun or Weatherby deer hunting rifle. You know, the kind of shooter that John Kerry, Mitt Romney, and John McCain are. Or say that they are. Whatever.

Are we this shortsighted? Don't we understand the incrementalism that has been used against us for years by the Anti-Gun groups?

This is a culture war. We are winning. Want to know why we are winning? Because guns are cool. Guns are fun. We need to expose more and more people to the fun and cool aspects of the shooting sports, and shows like this ARE DOING IT.

In this war, TV is a major battlefield. We have gained LOTS of ground with these shows. Want to give that ground back because you don't like the 'drama' that they inject into the shows? We really do want to cut off our nose to spite our own face.

I'll give you a clue here- the drama keeps a lot of females interested. While they watch that, they are exposed to guns in a normal and accepted format. I like that idea. I hope "Sons Of Guns" makes suppressors more mainstream. I hope I don't have to explain to people that my suppressor is legal and that it's not an 'assasin's tool' every time I mention I have one. I hope these shows spawn copycat shows that show the other niche markets in the shooting community.

Goddamnit people, this media exposure is good. Get these shows on your DVR and fast-forward through the drama if you don't like it. Get your wives/ husbands/ Girlfriends/ Boyfriends/ roommates/ life-partner/ whatever hooked on them as well. Support our sport. Get new shooters involved. Talk about Top Shot at work. Normalize shooting and gun ownership again.

...and stop being such whiny little bitches.
Posted by That Guy at 11:46 AM 4 comments:

Next chapter in the Charter Bulldog Saga

So, I got a broken gun for a gift.

Then it gets caught in the Snowpocalypse of Snowmaggeddon on the way back to the factory.

Next chapter: It has returned to the mother ship in Shelton, CT. I just called and confirmed that the gun was received in at 5:PM yesterday. They estimated five days for repairs.

The waiting continues.
Posted by That Guy at 2:39 PM No comments:

Messing with the kiddo's toys 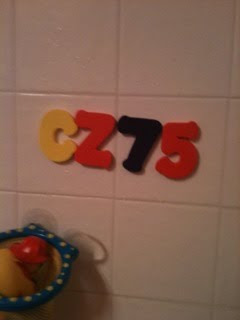 This is why we need more power plants. Now, get the hell out of the way of progress.

Sincerely,
The Rest of Us
Posted by That Guy at 3:55 PM 2 comments:

Next thing to go wrong on the Charter .44

We have the snowstorm of the century between this thing getting from Austin, TX to Shelton, CT. Good luck, little snubbie.
Posted by That Guy at 3:48 PM No comments: